Harriett's thoughts from our AGM 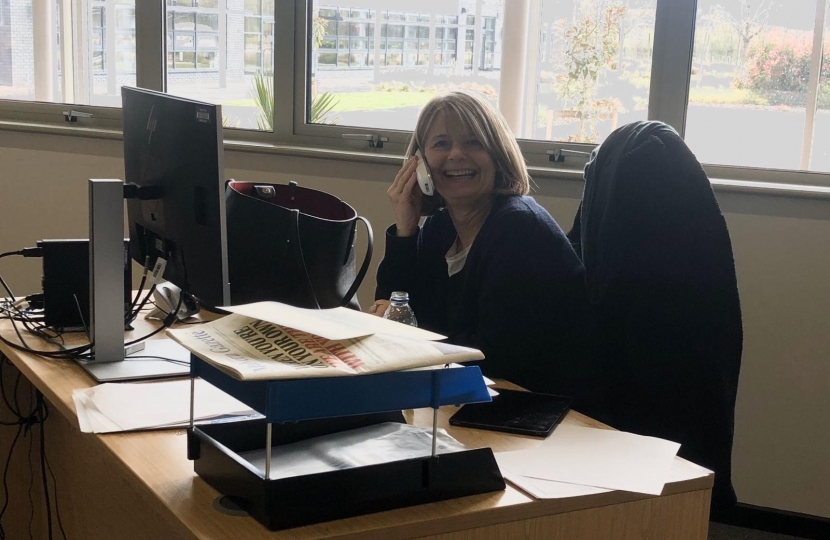 Thank you Harry and thank you West Worcestershire Conservatives for organising our Annual General Meeting on Zoom. It’s lovely to see so many of you on the call. Thank you to all the officers who are standing down and those elected this evening.

There is no doubt that this AGM is taking place at a very sombre time for our country, and we have rightly paid tribute tonight to all those that we have lost to Covid-19 over the last three months. I know that will include many whom you know and loved. West Worcestershire has experiences approximately 200 confirmed cases and in Malvern Hills 68 people – are friends and our neighbours – have passed away.

I know also how very difficult it has been for everyone to stay at home for so long and how challenging it is to find ways to stay in touch with loved ones and to observe social distancing. Many have suffered from loneliness and all of us have suffered from being unable to do what we usually do.

It’s also been a very difficult time in the economy, where many people have found their household income drop to zero. Some have been relying on savings. Others have been forced to borrow and rely on charity. I know that many of you will have been volunteering time and money to help others and I thank you for that.

It is in the context of seeing such suffering in my e-mail inbox every day and the seriousness of the public health crisis that I was on the receiving end of a torrent of correspondence about a certain adviser taking a trips to Durham and Barnards Castle. I have, in ten years as an MP, never experiences anything like it, with over 90% of letters calling for his resignation. I took a pretty stern line myself, reflecting the views of my constituents. But I’ve said my piece on that publicly and I do think we do need to move on.

When I look back over the time since we had our last AGM, we’ve been through a lot together. First we had the debacle of not being able to vote through the Withdrawal Agreement by March 29th, and the electoral backlash that harmed our District Council candidates. Then we had the Conservative Party leadership election, the new Prime Minister and Government, the prorogation of Parliament, the Supreme Court ordering us to return, the removal of the Whip from two dozen colleagues and

Remember that? The General Election? Less than six months ago. I am especially grateful to all our members who rose to that challenge magnificently. David Chambers, who was indefatigable as Campaign Manager, Paul Selway-Swift who was able to persuade so many of you to part with funds to pay for the campaign, Harry Tanner for presiding over us and keeping us all cheerful, Dean Wading for communicating electronically so well, Jennie Kelly and the office team for stuffing and delivering thousands of letters and leaflets, branches for coming out to canvas, deliver and do winter street stalls, Lucy Hodgson for mastering Votesource, Michael Hodges for being my agent and keeping the spending under control, and my ever-understanding husband Jim for dropping everything once again to look after me on the campaign trail.

And then, in the early hours of December 13th we heard what we had hardly dared to hope during the campaign, that places like Blyth Valley, Sedgefield and our local targets Dudley North, West Bromwich East and Birmingham Northfield had all turned blue and the most wonderful team of 365 Conservative colleagues has returned to Westminster and finally ratified that Withdrawal Agreement.

I can’t thank you enough for your support.

Not a day goes by at the moment without me giving thanks for that election and its result. It’s given the Prime Minister a solid majority and the strength to go through what he’s gone through and know that we now have another four years at least to get the country back on its feet from a health point of view and of course economically. We have another four years to deliver on the manifesto that got us all elected in December. And another four years to complete our transition from EU membership to independent, sovereign trading nation.

The challenges we’ve faced over the last year we were able to get through peacefully because of the strength of our institutions.

And the strength of our institutions will enable us to get through this pandemic too. Whether it’s our NHS, where everyone both nationally and locally astonished the world by building out a massive increase in capacity in no time flat, or our private sector, which managed to switch to ventilator and PPE production in no time, or our local farmers and food heroes who managed to switch rapidly  to more online and home delivery world or our Treasury and local councils, which managed to squirt cash out in record time to local businesses and households. Or our schools and universities, where brilliant brains are already coming up with the tests and the treatments, as well as hopefully a vaccine, that will eventually make this coronavirus crisis a distant memory.

And throughout this difficult time and into the recovery, we must remember what we came into Conservative politics to achieve – a better future for the generations that come after us, a good inheritance in the public finances, a thriving private sector to generate the tax revenues for excellent public services, an environment that we leave in a better state than we found it, a country where every British citizen, regardless of background, income, race, gender, religion can go on to achieve all they want to achieve. Peace and security at home and a world which is becoming healthier and more prosperous.

Locally, I am continuing campaigning in Parliament for our area. We mustn’t forget the floods we suffered in February and I am pushing hard to get the Severn Stoke scheme built and trying to get Tenbury Wells protected. Now that Worcestershire Parkway station has opened, I’m trying to get some further nine miles of the North Cotswold line dualled. And we’ve all seen how crucial it is to get that other network – the superfast broadband network – rolled out to every home in West Worcestershire.

In Parliament we are now back to 75% of our normal selves and are bringing in a lot of the legislation promised in the manifesto, including the March budget and the Immigration Bill that sets up our new points-based system.

So thank you for being part of one of our country’s strong institutions - a responsive democracy with strong local roots. Your membership of our

country’s most electorally successful political party is at the heart of that democracy.

Congratulations to the new Executive on its election this evening. I thank you all and I look forward to answering your questions.

The independent investigation into alleged discrimination in the Party has now concluded.