Harry Tanner has been a life long Conservative, and was elected Chairman of Malvern Priory branch in 2009. Soon after this, he became the WWCA Deputy Chairman for Membership and fund raising and in 2012 was elected WWCA Chairman. At the 2016 AGM he was elected President. The selection of District and County Councillor candidates has been part of his activity and campaigning in all elections has been a priority. 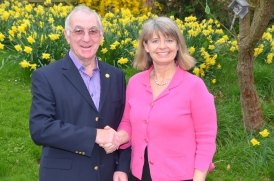