I was educated at Whitford Hill School in Bromsgrove and then went onto the Alice Ottley School here in Worcester.

After leaving school in 1978 I attended Clarendon College in Nottingham where I studied Hotel and Catering Management.

Having worked in Nottingham for a number of years in the Catering Industry I moved to the South East working as a management trainee in the education sector of contract Catering. From here I moved back to Worcestershire and worked at BBC Wood Norton as part of the Catering Management Team. In 1992 I went to work at Pebble Mill where I was the assistant Catering Manager for a Contract caterer.  In 2002 I moved to the University of Worcester where I was the Assistant Catering Manager working for Compass Group until I left to become the Mayor of Worcester in May 2008. Since then I have taken on my role of a councillor full time.

I am married to Stephen who working in the logistics industry and is also a member of Worcester City Councillor.

In 2009 I was elected to the County Council representing the Nunnery Division of the City. In my role as a county Councillor I sat on two Scrutiny boards – Children and Young People and Environment and Economy as well as being on the Hereford and Worcester Fire Authority.

Following the county election in May 2013 I was elected as County Councillor for Malvern Chase Division and I am also a member of County Council Cabinet with responsibility for Localism, Culture and Communities. This includes Libraries, Adult Learning, Registration Services, Achieving and Archaeology and Museum Services, Country Side Services and Worcestershire Regulatory Services

Other Roles and Interests

I am LEA school governor both for Lyppard Grange Primary School and Nunnery Wood High School Academy, and also a Governor of the Worcester College of Technology where I am the link governor for safeguarding as well as the vice chairman of the Audit Committee. I am the Honouree Vice President of St Paul’s Hostel as well as being vice chairman of the trustee board. Also I am a trustee of Lyppard Grange Community Centre. In 2011 I was awarded the Worcestershire Ambassadors Individual Corporate Social Responsibility award. I have also recently become a trustee of New Hope.  Since 2009 I have been a member of the Vigornia Rotary Club. Last year I was appointed a trustee of the Malvern Food Bank.

In what spare time I have I enjoy cooking and baking, taking photos and watching the Worcester Warriors. 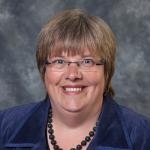 Councillor Hodgson is pleased to announce that using her County Council Divisional fund of £11,000 she has been able to help over 20 local organisations to help provide services and events to residents across the Chase the division.

During the year she has provided funds to help support the Barnard Green Traders Christmas celebrations along with the annual carnival day. The Sunshine centre requested help with running their yellow AA signs and Cllr Hodgson was able provided the funds to enable these were retained for the next two years.

She was approached by both Upton Scouts and the Malvern Hills Scouts for help in the refurbishment of their scout halls. She was delighted to provide the funds to help improve kitchen and toilet facilities.

Both the Cube and the Octagon centres have also benefited from the funds. The Cube received help with their disabled access as well as support for a number of their user groups. The Octagon were able to request help to purchase a new projector to help with increasing room bookings for the centre.

Through Malvern Wells parish Council 3 extra grit bins have been provided for those areas where here a real problems in icy weather but did not qualify for a yellow county grit bin.

Councillor Hodgson is pleased to announce that her new County Divisional fund is available for applications from the 1st April, this year she will have just over £10,500 to provide grants for local organisations. If you are interested then please contact Lucy on 01905 351382 or email LHodgson@worcestershire.gov.uk.

Committees and Outside Bodies

Cabinet Member with Responsibility for Localism and Communities