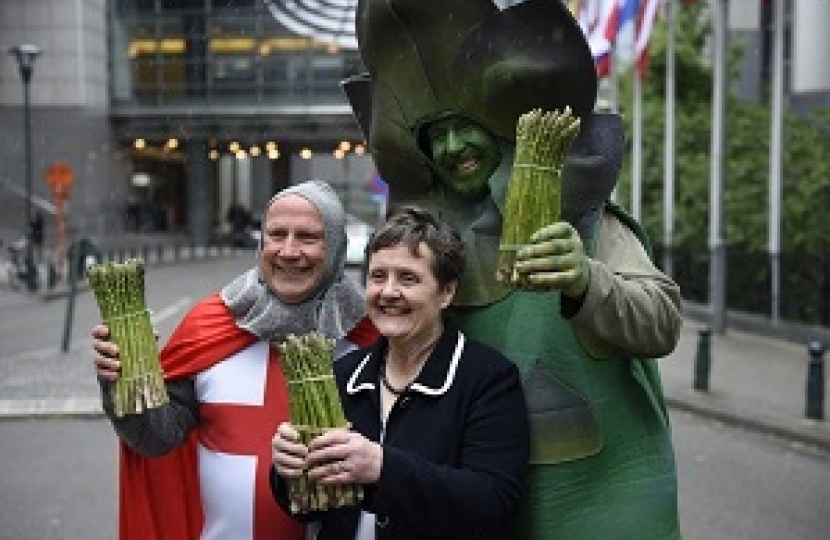 She made the call as she welcomed a delegation to Brussels from growers and aficionados of Vale of Evesham asparagus, which won PGI status earlier this year after a lengthy campaign.

The West Midlands Conservative MEP, who sits on the European Parliament's Agriculture Committee, said: "The PGI system is valued by consumers as much as producers. Shoppers know they are buying the real thing and getting the highest quality and flavour - growers know that inferior products cannot be passed off as theirs.

"This is one of the very positive things that has come out of the EU in my opinion and a system is too good to be lost as we leave. We should look to replicate it and keep the protection."

Accompanied by mascot Gus the Asparagus Man as well as St George, the delegation delivered a big bundle of freshly-cut local "gras" to the European Parliament to highlight its unbeatable quality, colour and flavour. Miss McIntyre took them inside the parliament for lunch with her fellow West Midlands MEP Daniel Dalton and other parliamentarians.

The delegation - all dressed in green - set out from Bretforton, Worcestershire, in a mini bus yesterday, with a send-off at the Fleece Inn, home of the renowned asparagus auction which is a focal point of the annual British Asparagus Festival.

Among the delegation was Nigel Smith, landlord of the Fleece and festival chairman; festival director Tash Daley; Angela Tidmarsh, tourism officer for Wychavon District Council and co-founder of the festival; grower and farm shop-owner Darren Hedges; and Wychavon marketing and events officer Steve Knight. Plus St George and Gus, of course.

Miss McIntyre said:  "It took four years of hard work to win PGI status but it is so worthwhile. The protection puts our product on a par with Champagne or Parma ham so that no-one can copy it."